Why Indefinite Detention Is Un-American 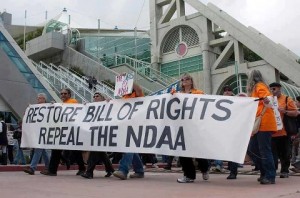 Governments throughout the vast majority of history have abused individual liberty and ignored basic safeguards like due process and habeas corpus.

June 15th, 2018, marked the 803 anniversary of the signing of the Magna Carta, a monumental moment for the advancement of liberty. Due process and trial by jury remain to be some of the most important safeguards for freedom against tyrannical government. The Magna Carta or “Great Charter” was signed on June 15th, 1215, when rebellious barons forced King John of England to agree to the most basic natural rights of the people. This included the first substantial guarantee of the writ habeas corpus, which “demands that a prisoner be taken before the court, and that the custodian present proof of authority, allowing the court to determine whether the custodian has lawful authority to detain the prisoner.”

“No free man shall be seized or imprisoned, or stripped of his rights or possessions, or outlawed or exiled, or deprived of his standing in any other way, nor will we proceed with force against him, or send others to do so, except by the lawful judgment of his equals or by the law of the land.” -Habeas Corpus, Clause 39 of the Magna Carta, June 15, 1215

Of the 63 clauses in the Magna Carta, some of the most important are due process, trial by jury (or peers), and limits on the power of a king or government. The Magna Carta of 1215 was a monumental advancement in the struggle for human freedom and justice. American Revolutionaries would carry forth these ideas of liberty in the U.S. Constitution and Bill of Rights. Patrick Henry once called trial by jury “the best appendage of freedom.”

No person shall be held to answer for a capital, or otherwise infamous crime, unless on a presentment or indictment of a Grand Jury, except in cases arising in the land or naval forces, or in the Militia, when in actual service in time of War or public danger; nor shall any person be subject for the same offence to be twice put in jeopardy of life or limb; nor shall be compelled in any criminal case to be a witness against himself, nor be deprived of life, liberty, or property, without due process of law; nor shall private property be taken for public use, without just compensation.

In all criminal prosecutions, the accused shall enjoy the right to a speedy and public trial, by an impartial jury of the State and district wherein the crime shall have been committed, which district shall have been previously ascertained by law, and to be informed of the nature and cause of the accusation; to be confronted with the witnesses against him; to have compulsory process for obtaining witnesses in his favor, and to have the Assistance of Counsel for his defence.

In Suits at common law, where the value in controversy shall exceed twenty dollars, the right of trial by jury shall be preserved, and no fact tried by a jury, shall be otherwise re-examined in any Court of the United States, than according to the rules of the common law.

Excessive bail shall not be required, nor excessive fines imposed, nor cruel and unusual punishments inflicted.

In 1787, Thomas Jefferson wrote to James Madison saying that

a bill of rights [should provide] clearly and without the aid of sophisms for… the eternal and unremitting force of the habeas corpus laws, and trials by jury in all matters of fact triable by the laws of the land and not by the law of nations.

On this anniversary of the Magna Carta, Senator Lindsey Graham of South Carolina objected again (for the sixth year in a row) to even allowing a vote on the repeal or amendment to sections 1021 and 1022 in the 2012 NDAA(National Defense Authorization Act). These sections allow for the indefinite detention and the potential assassination of any person without any due process. The vaguely worded provisions use the war on terror to classify U.S. citizens and any suspected person as a potential “enemy combatant” under the “laws of war.” With no end in sight for the “war on terror,” these provisions allow for the abuse of any person’s right to due process.

While the NDAA is an annual defense appropriations bill, in recent times it has been used as an omnibus vehicle for unconstitutional usurpations with dangerous provisions similar to the (unpatriotic) PATRIOT ACT.

“If you’re lucky enough, clever enough to capture one of these bad guys, the last thing I want them to hear is that you have a right to a lawyer. You don’t. Under military law, no enemy prisoner has a right to a lawyer.” – U.S. Senator Lindsey Graham, June 12th, 2018

In all capital or criminal prosecutions a man hath a right to demand the cause and nature of his accusation to be confronted with the accusers and witnesses, to call for evidence in his favor, and to a speedy trial by an impartial jury of his vicinage, without whose unanimous consent he cannot be found guilty, nor can he be compelled to give evidence against himself; that no man be deprived of his liberty except by the law of the land or the judgement of his peers.

The unconstitutional indefinite detention provisions of the 2012 NDAA are based on authority granted for use of military force (AUMF) for use in Iraq and Afghanistan, sections 1021 and 1022 opened the door for the United States to be treated as a “battlefield” and allow the government to indefinitely detain and imprison any person by only accusations or suspicions of a crime without due process or trial by jury. This is dangerous to liberty.

“And when they say, ‘I want my lawyer,’ you tell them, ‘shut up! You don’t get a lawyer.” –Senator Lindsey Graham on the indefinite detention provisions, December of 2011

In 1801, President Thomas Jefferson had a much different view and believed that “Freedom of the person under the protection of the habeas corpus” is one of the “essential principles of our government.”

Jefferson also wrote in 1798 to A. H. Rowen stating, “The Habeas Corpus secures every man here, alien or citizen, against everything which is not law, whatever shape it may assume.” This reaffirmed the idea of “unalienable rights” which applies to all people by the laws of nature.

The Ideas of Liberty Are Still Young

Governments throughout the vast majority of history have abused individual liberty and ignored basic safeguards like due process and habeas corpus. In the grand scheme of history, liberty is still young.

Senator Graham’s blatant disregard for real justice is a continuance of an age-old tale of government neglecting individual liberty. Due process has been destroyed under the guise of “foreign danger” and war.  As a Delegate to the Constitutional Convention, James Madison said in June of 1787,

The means of defense against foreign danger, have been always the instruments of tyranny at home. Among the Romans it was a standing maxim to excite a war, whenever a revolt was apprehended. Throughout all Europe, the armies kept up under the pretext of defending, have enslaved the people.

The indefinite detention provisions of the 2012 NDAA have the potential to be abused. These provisions essentially give government the ability to detain without trial or allowing for due process. This sets a very dangerous precedent of removing the burden of proof from the state.

When due process is ignored, it means that the government doesn’t have to prove anything. They simply have to accuse someone of a crime and secretly send them off to a prison or assassinate them. This goes against the very fibers of a civil and free society. We should never trade liberty for security, and we don’t have to!

“Trial by jury is part of a bright constellation which leads to peace, liberty, and safety.” – President Thomas Jefferson