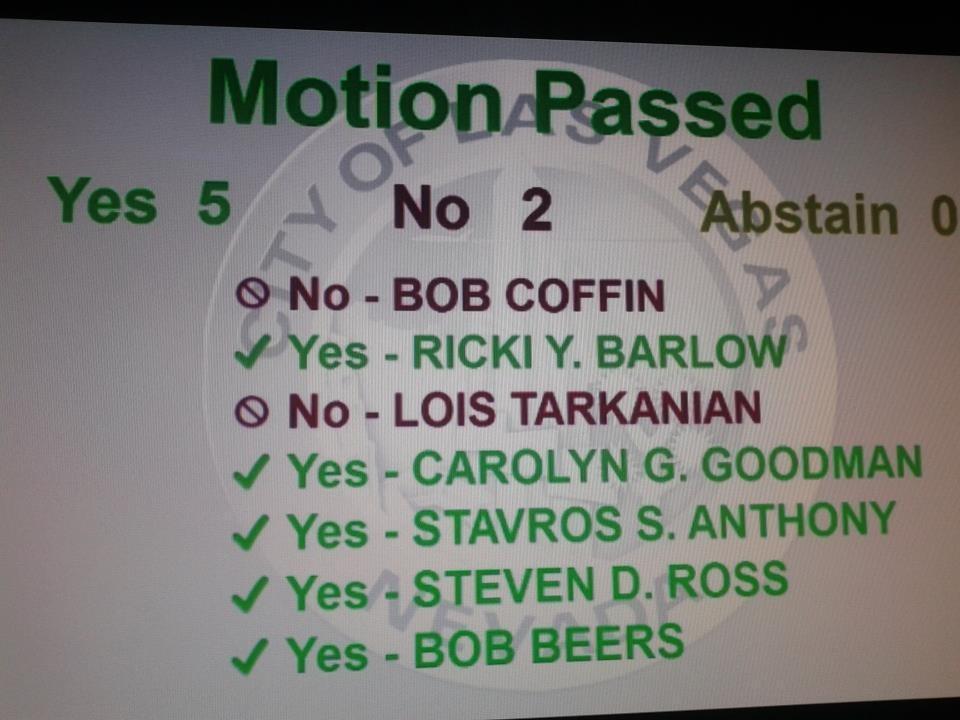 Just before noon on Wednesday, the honorable Las Vegas City Council passed a resolution rebuking the indefinite detention provisions of the 2012 NDAA, 5-2. The resolution may be read here at: http://tinyurl.com/cyu5bue.  The Resolution will now head to the Clark County Commission; if passed, it would be the first Joint City/County Resolution passed in response to the NDAA.

The 2012 National Defense Authorization Act was overwhelmingly passed by Congress and signed into law by President Barack Obama on December 31, 2011. The 2012 NDAA declares the United States to be a battlefield in the war on terror and Section 1021 & 1022 authorize the indefinite military detention, without charge or trial, of persons on US soil.

This violates at least 23 Articles of and Amendments to both the US and Nevada Constitutions.

"I am so incredibly grateful to the honorable Council members for supporting our efforts. I would especially like to thank Councilman Beers for helping me introduce this resolution to the board, and to Mayor Goodman for her amazing vocal support for the rights of all persons in Nevada. This action will support other cities, counties and states all over the country who seek to take a stand to protect constitutional rights."

Christopher Corbett, PANDA Nevada State Team Leader, said, "This is an important first victory in the fight to restore and protect civil liberties in Nevada. Hopefully this resolution will encourage the rest of Nevada to pass similar resolutions and state legislation."

There is already action under way to pass similar Resolutions in Northern Nevada.  Both the Washoe County Commission and Reno City Council have agrees to look at this issue in the next 30 days.

State Senator, Don Gustavson, has also submitted a bill to be considered during the 2013 Nevada legislative session.  The Nevada Liberty Preservation Act (SB378), which has 16 bi-partisan cosponsors, will lead the way in restoring Constitutional rights to all persons in Nevada.


This movement is just getting started. “We the People” will take back this great nation, one city, County, and State at a time.