The 2nd Circuit Court of Appeals has just ruled the NDAA's Indefinite Detention Powers are totally Constitutional…at least for now.

Judge Raymond Lohier, Denny Chin and Christopher Droney have betrayed their Oath to the Constitution they swore to Uphold, Defend and Support.

The NDAA will remain in effect, unless we do something about it. And we are. People Against the NDAA will be fighting for your rights in every County, City and State in the nation.

We are fighting back. 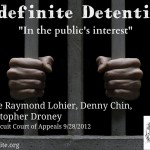