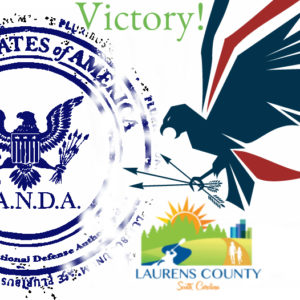 Breaking news! Laurens County South Carolina introduced the Restoring Constitutional Governance Resolution (anti-NDAA legislation for the local level) it was tabled for the next meeting. We want to get as many people to the meeting as possible and as many as possible calling and emailing the members of the county council. More info to follow…

Posted by People Against the NDAA on Thursday, June 28, 2018

Laurens County, SC – PANDA and our truly non-partisan coalition in South Carolina are pleased to announce our latest civil rights victory. Laurens County, SC has passed the Restoring Constitutional Governance Resolution (RCGR) in a vote of 3-1-1. Resolution 2018-31 provides inhabitants of Laurens County their first legal defense against indefinite detentions since passage of the 2012 NDAA.

The overwhelming support for Laurens County RCGR once again tells elected officials throughout Laurens County and all of South Carolina that the citizens here in the cradle of liberty will never give up their cherished civil rights.

Towns across the country including in New York, Massachusetts, and Idaho, have already made policy via Town Meetings whereby everyday citizens vote on issues that come up for debate. Some towns require a number of signatures to qualify for the meeting agenda; once on the agenda, the townspeople decide on the issue directly.

Councilman Jones (our resolution sponsor) said “Resolution 2018-31 calls on the state of South Carolina to interpose itself between unconstitutional federal usurpations and directs our Congressional delegation to begin efforts to immediately amend and repeal sections 1021 and 1022 of the 2012 NDAA.  These two controversial provisions (1021 and 1022) were signed into law by President Obama and championed by Senator Lindsey Graham, these sections use vague language to allow for the suspension of habeas corpus, an abuse of due process and the potential indefinite detention of any person.  I’m very glad my resolution 2018-31 passed Laurens County Council 3-1-1 at July 10th, 2018 meeting.”

He added:  “When due process is ignored, it means that the government doesn’t have to prove anything. They simply have to accuse someone of a crime and secretly send them off to a prison or assassinate them. This goes against the very fibers of a civil and free society. We should never trade liberty for security, and we don’t have to!”

About PANDA and the NDAA

The 2012 National Defense Authorization Act was overwhelmingly passed by Congress and signed into law by President Barack Obama on December 31, 2011 and remains in effect until repealed. The 2012 NDAA declared the United States is now a battlefield in the war on terror and Sections 1021 & 1022 authorized the indefinite detention, without charge or trial, of any person, including American citizens, accused by the President of undefined “support” of terrorist activity or commission of a ‘belligerent act.”  This vagueness violates multiple provisions of the US Constitution, in addition to the 1st, 3rd, 4th, 5th, 6th, 8th and 14th amendments.

People Against the NDAA (PANDA) is a national, nonpartisan organization founded in January 2012. PANDA is committed to reversing the NDAA’s unconstitutional sections by passing civil rights protections at the state and local levels which reassert and uphold the Bill of Rights as the highest law of the land.  PANDA originated in Bowling Green, OH, has since decentralized, and now provides activist support for thousands of people across the country taking on the detention provisions of the 2012 NDAA.

At number 8, Laurens County’s resolution represents a clear movement emerging. The Resolution states:
“…it is unconstitutional, and therefore unlawful for any person to:

a. Arrest or capture any person in Laurens County with the intent of “detention under the law of war”, or

b. Actually subject a person in Laurens County to “disposition under the law of war”, or

c. Subject any person to targeted killing in Laurens County; …”

Unlike the Liberty Preservation Acts introduced and/or passed in several states, including Virginia and California, the Restoring Constitutional Governance Act/Resolution prohibits any person, local, state, federal, or international, from utilizing the powers of the “law of war” under the 2012 NDAA or any similar law or authority, in any city, county, or state.

Six cities and two counties have already taken time to ban these provisions. Is yours next?